Auction Report and some Sobering Stories

This blog should begin to receive more attention now that the auction is over, and the office computer is back from the repair shop.

Since this is the Valley of the Sun, I would typically report to you that God blessed us with a beautiful, sunny auction day. This year, however, Phoenix experienced a two-day dip in temperatures, along with heavy rains and wind. The blessing, though? The heavy rains and wind came on Friday, with Saturday only damp and chilly, a few sprinkles here and there. It may’ve been a less-than-perfect weather day, but we saw God’s blessing, too, in the generosity of the many faithful auction bidders who came. Proceeds totaled over $20,000! The top selling quilt was this one, which brought $1,300. 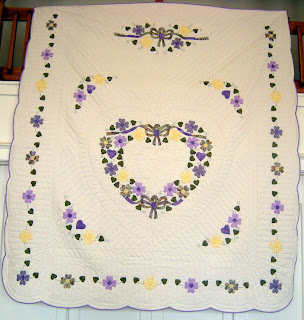 While I don’t have a photo of it, perhaps one of the m﻿ost surprising sales was a vintage children’s car that brought $425.00. A small child could sit in the car, turn the pedals, and make the car go. I was told that two grandmothers purchased the car and split the cost between themselves. The car’s donor had rescued it from a trash pile and cleaned it up a bit, but never imagined it would fetch that amount!

This week has been one of reminders of why we are here and why we are called to work with youth in the heart of Phoenix.  A 14-year-old girl, a good friend of several teens who regularly attend Aim Right programs, was murdered by her mother’s boyfriend.  In this news video, the teen who does most of the speaking is one we know.

You can read or view more here:  Friends, Family Gather in Memory of Slain Phoenix Mom, Daughter.
As if that news isn’t enough, the small group of girls I meet with on Thursday evenings had much to say about the police drug search that went on in their school yesterday (located right across from Aim Right).﻿  According to them, students were patted down and searched, with around twenty 7th graders found with drugs in their possession.  Police are still on the lookout for two 16-year-old’s who have been a main drug supplier to the students.  I find it interesting that none of this has been reported in the news, since I recently heard a feature on the news about one suspected inebriated student in a suburban neighborhood school.
Those who know the names of the dealers are afraid to “snitch” to school or police officials, fearing the consequences if someone should find out they did the telling.  In a culture of fear, darkness, and evil, God help us to:
“take up the shield of faith [to] extinguish all the flaming darts of the evil one and take the helmet of salvation, and the sword of the Spirit…praying at all times in the Spirit with all prayer and supplication.”  Ephesians 6:16-18