Blog: Caleb has tricks up his sleeve….

Whan a youth leader says, “Well, we’re going to do a little activity, and I need two volunteers,” that’s a time to be afraid. 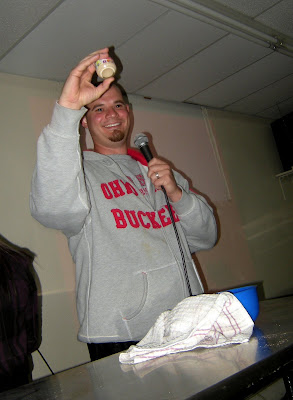 You’d think that gently warmed, pureed turkey would go down smooth as Jello. However, I think these good sports would slightly disagree! 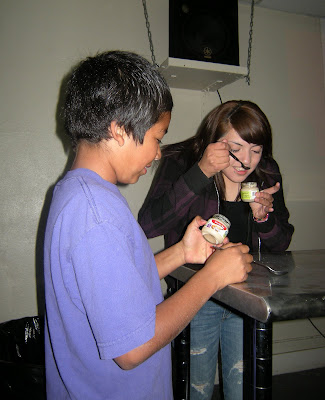 As the evening progressed, Caleb had a few more tricks up his sleeve. This time, he didn’t ask for volunteers. Instead, he selected the victims. Jacob, visiting from Indiana, received an unexpected lip makeover, while Brittany and Sheila, former interns visiting from Ohio and Iowa respectively, were called upon to join the fun, too. 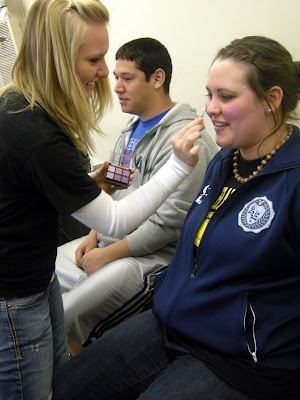 The makeovers were of the outlandish variety, but Caleb’s lesson Friday evening was not. He asked those in attendance, “Are you happy with who you are?” He then shared from Genesis how God called His creation “very good.” Very good even without three coats of mascara or Van’s shoes or expensive jeans from the mall. It was a timely message, especially since the culture screams at youth (and at any age, really) that you must measure up to an often impossible standard of beauty to be accepted and desired.
Fortunately, this little one isn’t too concerned with her looks yet…..just that Daddy let some perfectly good baby food go to waste on those ungrateful big people! 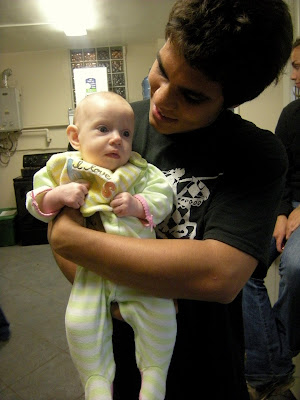