I heard recently that June tied for the warmest month on record in Phoenix since meteorologists began keeping track of temperatures in 1895 (the other “hottest June” was in 2013).  Aim Right’s teen campers should be more than ready to head to Southwest Colorado and dip their toes in a frigid river until they’re numb.

Speaking of rivers, there’s quite a gem in this video at the 1:38 mark.  The screaming damsel in distress is a former intern, and our executive director is shown coming to the rescue of the two ladies. Also, at the 1:14 mark, some Aim Right’ers are playing basketball.

A Minute At Circle K Ranch 2015 from Cindy Brannon on Vimeo.

This year’s camp theme is “ALL IN.”  We would love to have as many pray-ers as possible to cover the campers and the week in prayer.  Click on the image below to view a Prayer Guide to help you pray specifically for staff and campers by name. 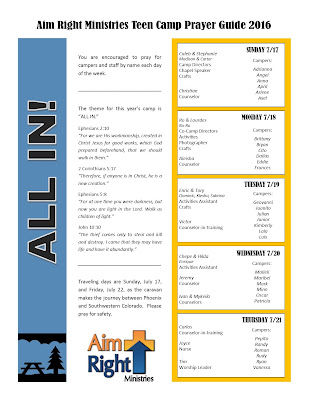