Of Methodists and Love

Since Aim Right programs don’t begin until September, I have taken advantage of a lighter schedule to tackle some much needed paper shuffling in the office. With great glee, I have filled File 13 a few times. With great disappointment, I have stared at what is left — that which I cannot responsibly discard — and had to kick the brain into full gear to decide how to best store it, file it, or conveniently lose it.

Just kidding on that last part. That wouldn’t be responsible.
What has been great fun throughout this process is reviewing some of Aim Right’s history. For example, I found this photo of our current facility, circa 1999, I believe, around the time of its purchase. The building was in major disrepair: 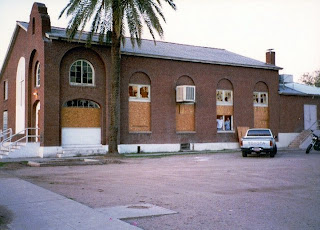 The property today, looking much more inhabitable and inviting: 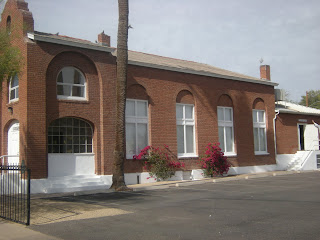 This plate is mounted on the brick wall near the main entrance of the church and attests to its longevity in this neighborhood: 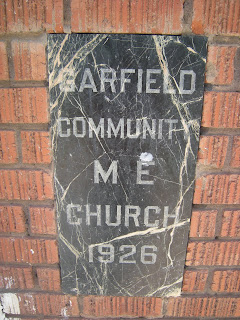 The abbreviation “M.E.” stands for Methodist Episcopal. Since my familiarity with the history of Methodism is rudimentary at best, and the thought of Episcopal Methodists sounded downright intriguing, I wikipedia’ed those M.E. folks to learn more about them.

The famous Wesley brothers–John and Charles–are credited with founding the Methodist movement as a whole in Europe, along with George Whitefield. When it came to extending the reach of Methodism to the United States, John gave the approval for two men, Thomas Coke and Francis Asbury, to serve as the first Methodist bishops in the United States. At a conference in Baltimore in 1784, this newly formed group christened themselves as the Methodist Episcopal Church. Perhaps the choice of “Episcopal” was indicative of the close ties most early Methodist leaders still had with the Anglican church.
As is the case with almost any denominational movement, there comes a time when parishioners disagree over the color of carpet in the nursery or whether the organ should be placed on the right or the left side or whether the bulletins should be typed in serif or sans serif font. And so they form a new denominational branch so they can be happy about the carpet color, organ placement, and bulletin font.
It’s hard to imagine weightier issues than the ones mentioned above, but the Methodists were dealing with some tough ones — slavery, for instance. Abolitionists formed the Free Methodists and the Wesleyan Methodists, while the staunch slaveholders left the traditional M.E. Church and creatively labeled themselves the Methodist Episcopal Church South. The church remained relatively divided for close to 100 years, until 1939 when the North M.E.’s and the South M.E.’s finally agreed to come together again. Joining them in this merger was yet another branch — the Methodist Protestant Church. The three churches put their heads together and came up with a brilliant name for themselves — The Methodist Church. However, there were some who were still fiercely segregationist and opposed the merger, forming yet another entity — the Southern Methodist Church. It wasn’t until 1968 that The United Methodist Church, as we know it today, came along as a result of yet another merger.

Having grown up in the Baptist-plentiful Midwest, I rubbed shoulders with Free Will Baptists, Independent Baptists, Southern Baptists, First Baptists, Bible Baptists, Missionary Baptists, and undoubtedly a few other genres of Baptists I can’t recall at the moment. The only Methodists I knew were of the United variety, but now I know, as Paul Harvey would say in his gravelly voice….”the rest of the story.” They haven’t always been united.

Attributed to St. Augustine is this saying: “In essentials, unity; in non-essentials, liberty; in all things, charity.” My intent has certainly not been to pick on Methodists or Baptists in this post, for the church as a whole struggles to authenticate her faith as it relates to genuine love for believers and unbelievers. As Francis Schaeffer writes in his short work The Mark of the Christian, which you can read here, “Love–and the unity it attests to–is the mark Christ gave Christians to wear before the world. Only with this mark may the world know that Christians are indeed Christians and that Jesus was sent by the Father.”

Schaeffer also states, and the emphasis is mine: “The point is that it is possible to be a Christian without showing the mark, but if we expect non-Christians to know that we are Christians, we must show the mark.”