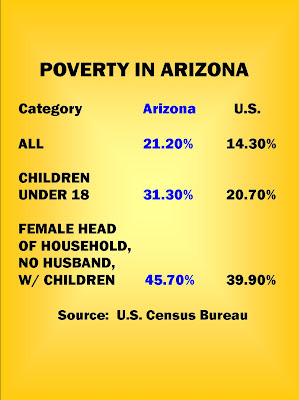 As streams of data begin to be released by the U.S. Census Bureau, their findings regarding the poverty level in Arizona caught my attention this week. Arizona is ranked second in the nation in the percentage of residents living at or below poverty level. In Arizona, 1 in 5 residents live in poverty, and over 30% of its children live in poverty. That figure jumps to 45.70% in households where a mom is present, but a dad is absent. You can read more about the findings by connecting to this link:

Who are the poor? Especially as it relates to Aim Right’s sphere of outreach, who are the children who live in poverty? While the instances below are true stories–ones I’ve encountered in the past 6 days–I’ve changed some names and details to protect privacy.

Jazmin and her 4 or 5 siblings live in a house with their parents. From the outside, the house appears to be of reasonable size. In a recent conversation with Jazmin, I learned that while she has her own room, the rest of her siblings either sleep in the living room or the parents’ room. Jazmin explained to me that the house is actually a duplex, with another family living in the back portion of the house.

Eduardo’s family lives on a limited income, which is even more limited when Dad hasn’t worked for at least 2 weeks. With the end of the month near, the family’s food stamp allowance has been exhausted. Dad visited the local food bank to secure some fruit and bread for the family, but he spent precious funds on booze for himself. I have to wonder if one of the reasons he drinks is to escape his drab reality.

Neighborhood Ministries, a local outreach organization, offers a helpful resource called “God’s Heart for the Poor.” It’s a basic list of Scriptures to dive into and learn for yourself what God’s Word says about the poor. May God stir our hearts to reflect His as we relate to the poor in this state!