Here at Aim Right we are full of joy and hyped to welcome Joel and Anndra Roby to the staff squad! How exciting is this??!! We are so pumped to know that God has blessed us with their help and presence to assist in the mission He has heavily placed in our hearts to follow.

The decision for them did not come easy tho. God tugged  at their hearts and after many prayers from family and friends they chose to give in and come back to where it all started for them.

Joel and Ann met here in Phoenix through Aim Right. Joel had served as an Aim Right Intern 2009-2010 and decided to return and lend a hand with the ministry in 2013-2014 just in time to meet Ann. 💘 Ann, on a spontaneous decision, decided to move to Phoenix with a dear friend. Here she got affiliated with Aim Right through her friends Aunt and Uncle. Then one night after Kids Club they were able to introduce Ann to Joel at a near by Zoyos Yogurt spot. They later got to know each other a little more at a Staff Retreat in Payson, AZ.

Eventually they both moved back home and still kept in touch with each other. A long distance relationship lead to an engagement. 😍 After marriage God then led them to Ohio where He needed them to be. Caleb, Aim Right’s Director,  and his wife Stephanie happen to be in Ohio and were able to squeeze in a double date with the newly weds. Unknowingly after that double date God had planted a seed in Ann’s heart when listening to what Caleb said Aim Right needed. She struggled with the fact that God was calling her to step up for Aim Right as the new Children’s Ministry Director. That’s a huge change God was asking her to do but after many intentional prayers for guidance and a sign… Caleb calls out of the blue. “I dont know if this is a shot in the dark” Caleb first said and asked if they would consider moving to Phoenix to fill the position & help out with Aim Right. WOW!! You cant deny that SIGN!! They eventually said YES and were blown away from all the support they received. How Amazing is our God!!

We couldn’t be more blessed and grateful for their obedient hearts!
WELCOME JOEL & ANN!! 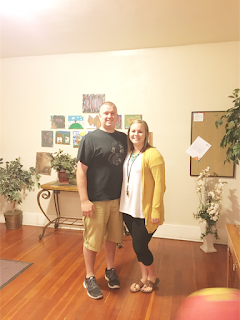 – Pray for God to lead them in the purchase of a permanent house or rent.
– Pray over insecurities and confidence in their rolls as new leaders.
– Pray that they continue to get settled.
– Pray for good health.